Ep 63 TicTacToe: How to compose an image for maximum impact 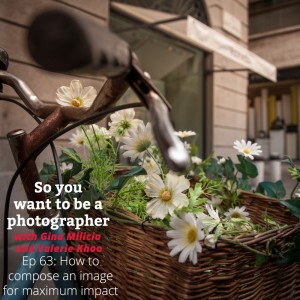 You might have the technical know-how but do you know the rules for composing an image with maximum impact?

In this episode, Gina and Valerie discuss the top 11 rules you need to consider when you are composing an image. There’s much more to composing than just the Rule of Thirds. You’ll discover what you need to know about the Fibonacci sequence, how to get the right balance, why odd numbers are great – and much more.

Bryan Turner
“I was tinkering around with this photo from last summer of my wife and daughter when I applied Gina Milicia’s chocolate preset. I think it gave it a pretty cool look. Thanks Gina!” From Peter Foote:
“Just wondering if others edit street photography to remove distractions? This frame had a woman and part of a man entering from the right and drew too much attention so I cloned them out.”
Gina’s feedback is in the episode. Listener question from Melanie Young:
“I am a complete amateur and would like some feedback. What can I do to make this photo better? I was really focusing on skin tones. There has been little touching up in the editing process. I appreciate the help!”
Feedback from Gina is in the episode. TicTacToe: How to compose an image for maximum impact

Why are some photos stronger than others? Subject, light and post production are really important but if the composition is off it doesn’t matter if you’ve just photographed the best sunset in the world, the image won’t work as well as one that’s well composed.

The rules of composition are mostly inherited from the art world and these rules or guides are based on mathematical formulas first discovered thousands of years ago.

When photography was invented a few hundred years later it made sense to also apply these rules or guides to photography.

1.Tic Tac Toe Rule (AKA The rule of thirds) Above: In this image of Jared Deparis I’ve framed it so his face is a third of the way into the frame and his eyes are in the top third of the frame. Above: Eye tracking studies show where the majority of people will first glance at an image.

When is it ok to break the rule of thirds?

2. The Bunny Rule (AKA the Fibonacci sequence or Golden mean) Get your own free Fibonacci template here

There was this guy called Leonardo Fibonacci who discovered this mathematical formula based on being curious about rabbits doing what rabbits do. He wanted to know how many rabbits would be born if 2 rabbits “did what they do”.

Later it was discovered that this sequence is also repeated in clouds, the way branches grow, shells and some of the most beautiful architecture and art in the world.

1 +1 +2 +3 +5+ 8 and place the important part of your image in the smallest square you will have a visually pleasing image.

Everything beautiful in nature follows a 1:1.618

Download the Fibonacci template and overlay it on your images and tweak the cropping and see how the shot looks. 3. The rule of odd numbers Above: I prefer to shoot groups of people as odd numbers, like this cast shot of the Australian show Rush.

FYI if you’re wondering what the guy who voices show opening and closing looks like that’s him on the far left of this image. His name is Samuel Johnson and he is an awesome actor and an amazing guy! Above: In this image I shot of Sydney Harbour Bridge, the bridge is the hero of the image and I’ve balanced it with the ferry on the far right.

Cropping an image too tightly is going to make the image feel constricted. leaving space around the image looks more comfortable because you’ve given the image space to breath. Above: In this image of actress Nicole Da Silva I used negative space and the direction of Nicole’s face to lead the viewer through the frame. Above: Shooting with a long lens and wide open shutter (shallow depth of field) really makes the tomatoes the hero of this shot. Above: I used both the path and the umbrellas as leading lines in this image of a little girl in Italy.

A great composition has elements that lead the viewer’s eye through the photo: Above: I used layering in this bike shot I photographed in Milan

You can create depth in an image by creating a foreground, middle and background Above: I used trees to frame this image of a beach in Bali Above: I love shooting through doorways and arches like this image in India